Let me begin with my sincerest apologies regarding the delays associated with my Vanishing Cuba book. We had initially thought that the book would ship from Italy in early November, but unfortunately, this never materialized.

There are various reasons for the delay, but most notably, the pandemic initiated global supply chain problems that have created issues across the world. This includes the shortage of paper, semiconductor chips for cars, overcrowded ports, container ships waiting to unload, and basics like trucks and drivers to move goods through the supply chain.

Back in September, as we were preparing to release the files to the printer, we never thought these issues would play a role in delaying the book by three to four months. At every turn throughout the manufacturing process, we were facing delays. And once we began to back into the holiday season, it only got worse, and the costs became astronomical.

Let’s keep in mind that this book is no ordinary book. It consists of three editions, one of which is the collectors box-set “Reserve Edition.” Each book, for all the editions, is handmade (other than the automated bindery process). The process took longer than initially estimated, and it made no sense to rush it after almost two years of creation and development.

Now for the good news! The books are ready to begin shipping. The first books will begin arriving in a few weeks via air-freight for those who pre-ordered. The rest of the books will follow in January as several shipping containers make their way across the Atlantic to New York. Pre-orders destined for Europe, Asia, Africa, and Oceania will soon begin shipping from Italy. And by January / February, all books will start shipping to fulfill orders placed through Amazon, bookstores, universities, and public libraries.

We will continue to offer “signed” Silver Edition books for all orders placed directly through Vanishing Cuba or Red Octopus Publishing.

Thank you all for your patience and understanding. 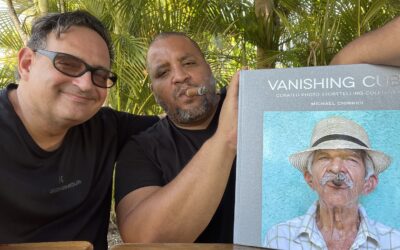 THE VANISHING CUBA CHRONICLES – MICHAEL RETURNS TO CUBA WITH THE BOOK

In March and May 2022, I returned to Cuba and asked my Cuban friends to sign a copy of the Silver Edition book. I was amazed that so many Cubans wanted to look at every photo and read every story. What an honor to have my first published book reside in the University of Cambridge Library in the United Kingdom. Many of you probably don’t know this, but this prestigious University (considered one of the top ten in the world) has over 100 libraries within its library system. Vanishing Cuba can be found in its Latin Studies Library. I was elated to learn that Barnes & Noble will carry my Vanishing Cuba Silver Edition book, beginning March 30. The book will be available for 24 hour delivery from BN.com or directly from their network of over 600 bookstores across the United States.